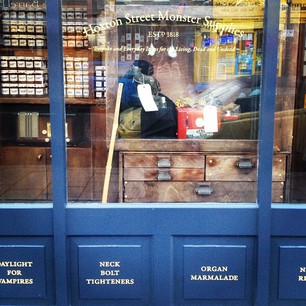 Tickets for The Story next February are going fast – there are currently just 43 Standard Price tickets available, so if you haven’t got a ticket – get one now! After they have gone, there will be a block of Last Chance tickets released, but judging from previous events, they’ll go as well before Xmas, so if you want to get a ticket, get one from our Eventbrite site now!

This is the time of year when all the bits of The Story start to come together – we’re booking flights for speakers, confirming the tech team, and on Wednesday we went in to visit The Ministry of Stories in their Hoxton St Monster store to discuss an exciting new project for the day. And to whet your appetite, we’re very pleased to announce three more speakers!

Molly Crabapple is a New York artist. She has created subversive, Victorian inspired art for The New York Times, Red Bull, the Royal Society of Arts, the Wall Street Journal, CNN, Marvel Comics, and The Groucho Club, as well as Occupy Wall Street. Molly has been called ‘Equal parts Hieronymus Bosch, William S. Burroughs and Cirque du Soleil.’ by the Guardian, and ‘A brilliant and principled artist’ by BoingBoing. She is the co-creator, with Laurie Penny, of Discordia: Six Nights in Crisis Athens, about life in Greece under the Eurozone crisis, and has created illustrated journalism for CNN and Vice.

Ben Boucquelet is a writer, artist and animator. He is the creator of The Amazing World of Gumball, an incredibly inventive, funny and subversive show from Cartoon Network. His career in animation includes working with the UK’s most innovative animation studio – Studio AKA – where he met Mic Graves, the co-creator of Gumball. If you haven’t seen any episodes of Gumball yet, then get to Youtube now and make your day instantly better. Gumball is one of those shows that transcends its target audience, with the kind of comic writing and lunatic visual invention that you rarely see in any adult comedy. I’m a *huge* fan (although not as much as my daughters) so I’m really pleased Ben is joining us for The Story next year.

Mikey Please is an extraordinarily talented film-maker, working with stop-motion papercraft animation. In 2010 he completed a Masters in Direction for Animation at London’s Royal College of Art, and his thesis film, The Eagleman Stag, is currently shortlisted for an Academy Award. In 2011 it premiered at Sundance Film Festival and in 2011 it won the BAFTA for best Animated Short and numerous other accolades, including awards from SXSW, Seattle, LA and Chicago International Film festivals, the AFI as well as showing at over 400 festivals and public screenings. In early 2012, he was awarded a 3-month fellowship in Tokyo by the Japanese Center for Cultural Affairs. During this time, he developed the script for a new short film, Marilyn Myller which is currently in production with Mikey’s commercial representatives Hornet Inc in New York and Blink Ink in London. His first feature film, Zero Greg, is currently in development with Film Four and Warp Films.

So – there’s only a couple more speakers to announce now, with a few lovely surprises left up our sleeves. Tickets will go very quickly between now and Xmas, so if you haven’t got yours yet – get them from Eventbrite now! And when you get your ticket, don’t forget you can get a copy of the first ever Storythings publication – Vacuum Days by Tim Etchells – at a discount launch price. We’re holding launch parties for Vacuum Days in London and Sheffield in the next few weeks, so please come along – Tim gave a reading at the first ever The Story event in 2010 and an early version of the Vacuum Days format appeared in the newspaper we published, so we’re really pleased that we’re able to publish the full book. Come along to the launches in London and Sheffield and get a copy – its funny, dark, and very, very beautiful.